“We’ve been very careful. Migrants are cautious. We have hand sanitizer, and are always washing our hands. We bathe frequently,” said Roberto Gómez Hernández from Honduras from behind his face mask.

He was standing on the train tracks carrying only a backpack and wearing a makeshift raincoat made out of a garbage bag.

Gómez is in his late 40s and was leading a handful of migrants who met each other as they traveled from the southern Mexican border to Veracruz, a dangerous point on the migrant trail.

“Right now, we’re all dirty from the train,” he said apologetically, aware that migrants were shunned by the locals because of rumors that they carried the virus. He immediately showed me his almost empty bottle of antibacterial gel.

Night fell while the railroad workers continued to hook up train cars, and a rainstorm brought some relief from the suffocating heat of the Tierra Blanca sugarcane plantations, a heat that discouraged travelers from staying in the area for very long.

Danger is the other factor that keeps migrants from staying in Tierra Blanca. It’s an area known for kidnappings and violent assaults. On top of that is the risk of catching the deadly virus.

Tierra Blanca has imposed strict virus containment measures, evidence of the gravity of the pandemic in this part of southern Veracruz. Officials have closed the migrant shelter, as well as the city plaza and main streets. The city is under strict police surveillance. This is a familiar scene for the group of migrants.

Gómez reached the Guatemalan community of La Técnica in mid-July. The village sits on the banks of the Usumacinta River, on the border with Mexico. To get there, he traveled over seven hours on a dirt road, hitching rides on small trucks that circulate among the biblically named towns in the vast Guatemalan department of El Petén. 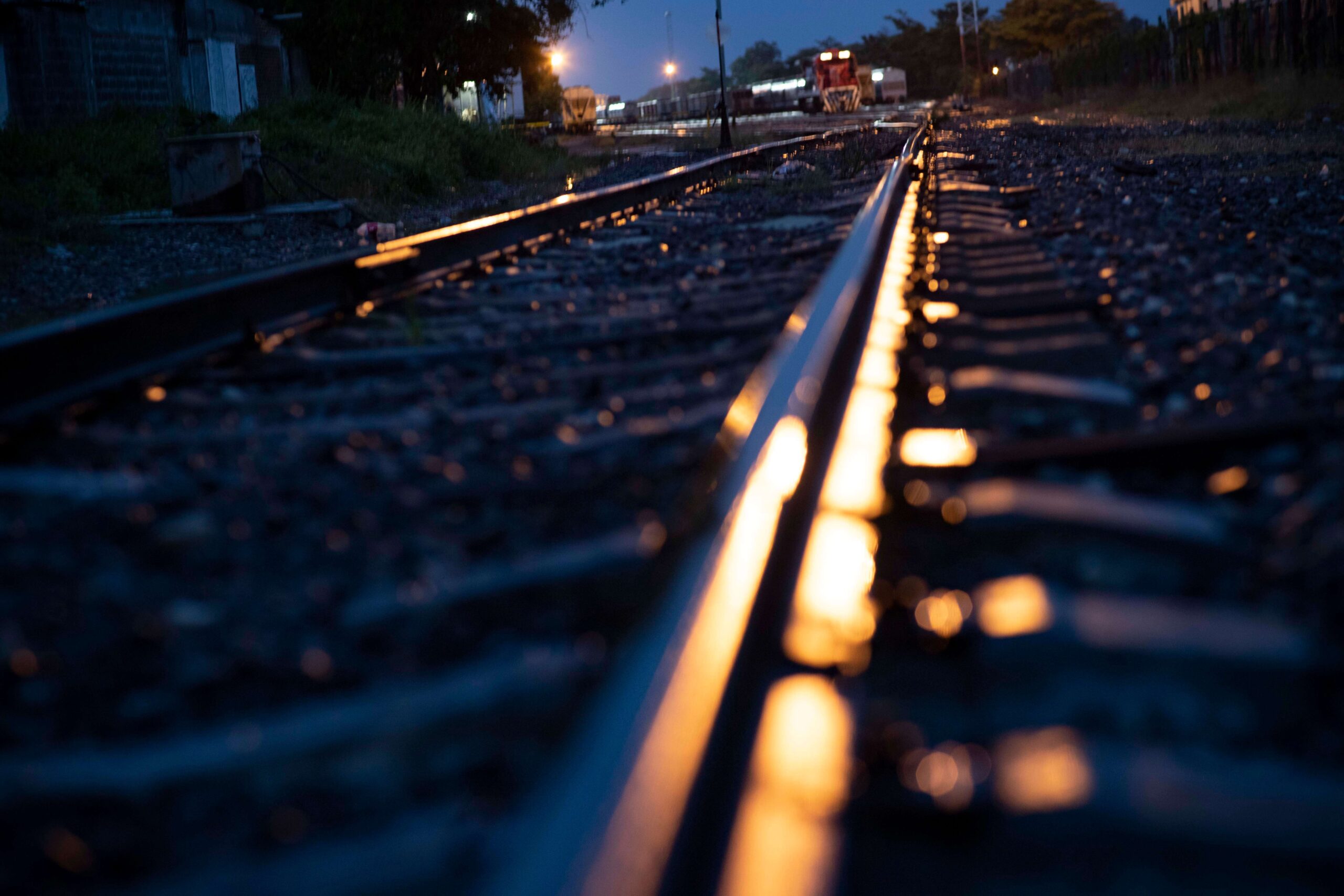 These trucks often stop at places where “polleros” recruit migrants to transport them north. Sometimes the trucks are intercepted on the road by vans who quickly pick up groups of migrants and then drop them at some border location.

When the group led by Gómez crossed the Usumacinta River from Guatemala to Mexico, they entered Frontera Corozal, an area that attracts tourists interested in its archaeological ruins. For travelers without visas, it’s known for its strict health and immigration controls.

“There was a medical brigade on the Mexico-Guatemala border that checked us out, took our temperatures, and gave us some pills. From there we walked for three days to Palenque [Chiapas]. There are a lot of immigration officials there rounding up all the migrants. That’s where we got on the train that brought us here,” said the Honduran when we found him waiting by the train tracks on July 24.

Despite the COVID-19 threat, forced migration from Central America hasn’t abated. But Gómez and his group noted that things have changed, and there are new challenges for those brave enough to journey across Mexico towards the U.S. border.

“COVID is real... it’s a worldwide virus, so you really need to adapt to it. COVID is here to stay, it’s not going to disappear. You can’t sit around waiting for it to go away, because that’s not going to happen. What do we gain by staying in Honduras and dying of hunger?” said Gómez as he stood in the rain, barely protected by his makeshift raincoat.

As we spoke, his group consisted of four restless men who were constantly going in and out of the corner store for food and water. They flitted among the shadows, frequently checking on the trains that were being moved around the tracks. As the hours went by, the group grew to about 20 people.

“Here we go… we’re a little nervous, but here we go. As far as I can tell, that disease is real. There have been lots of infected people, but some people just ignore it all,” said Kevin José Enrique Reyes, a young member of the group who knew that Tierra Blanca was a pandemic red zone, with the highest risk of contagion. 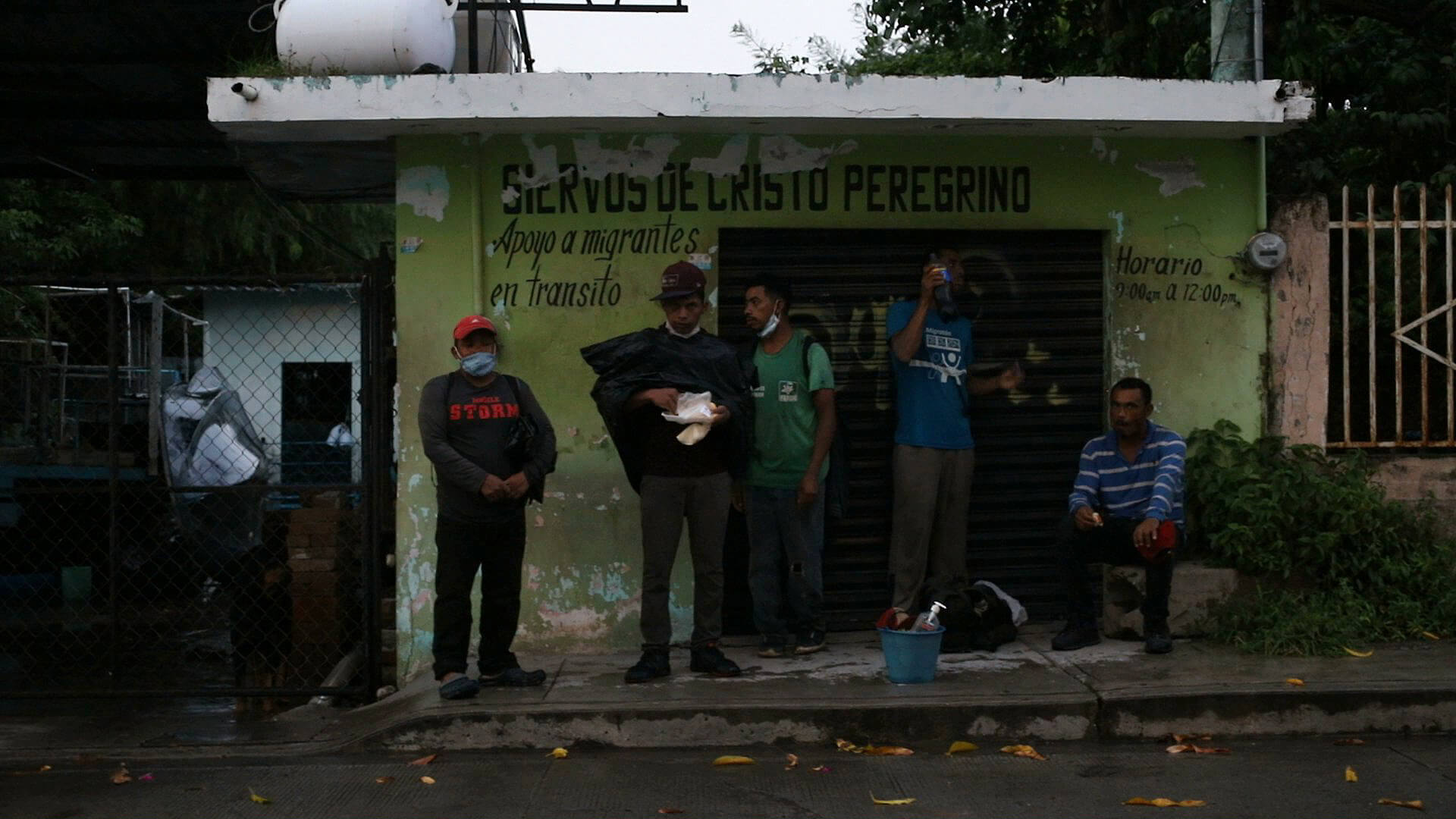 A group of migrants takes shelter from the rain in Tierra Blanca as they wait for the northbound train.

Before arriving at Tierra Blanca, the train passes Medias Aguas, a community in the Sayula de Alemán municipality, a place well known for kidnappings. This is a cattle ranching area where two migration routes come together: the route taken by Gómez that begins in northern Chiapas and crosses Tabasco, and the route that begins in southern Chiapas.

We encountered Francisco Javier Beatriz, a young Red Cross paramedic, on the train tracks. He was talking with the station guards about the train derailment a few days earlier during the third week in July. There were eight cars carrying a cargo of metal rods, said one guard. No migrants were injured because luckily, no one was traveling on the roofs of the train cars when they overturned.

According to the paramedic, the derailment exposed the numbers of migrants traveling on these freight trains. When the tracks closed down for repairs, the migrant stowaways got out of the trains and walked along the tracks, continuing their journey on foot. This had not been seen since the influx of migrant caravans in late 2018.

“Here in Medias Aguas, we attended to people one-by-one, migrant by migrant. There were approximately 70 of them. We helped them make phone calls home, all over Central America. We gave them food, saline drips, and medicine. This was our emergency response to their obvious fatigue, thirst, and hunger,” he said.

Beatriz’s medical brigade has been working in the suffocating heat, assisting migrants in five different municipalities. He said these migrants are "90% more vulnerable” to contracting Covide virus than people staying in homes or shelters.

“So far, we haven't had a single migrant with Covid symptoms. The truth is, we’re surprised because we know that they are highly vulnerable to infection. They drink whatever water they can get, and eat and rest wherever they can,” he said.

The train derailment and the presence of migrants in unusual places revealed what humanitarian workers already suspected: the pandemic has forced many migrants to travel again on the trains. In areas like this one, this dangerous mode of travel is now the main option for migrants headed north.

This changed the relatively safe means of travelling in caravans that began in October 2018. Thousands of migrants walked openly together, without paying coyotes or hiding from the authorities. Now they’re back to travelling alone, on furtive journeys fraught with risks they hoped were long gone.

One person who asked to remain anonymous has been monitoring migrant traffic for years. She said that in March, the organization that employs her counted about 1,000 migrants on the trains. When the pandemic was peaking between April and June, they saw less than 10 migrants a month. But by the end of July, they were seeing a surge of migrants on the trains, up to more than 200 a month.

Although the Tierra Blanca migrant shelter was no longer offering lodging, it was providing food and water to migrants who could be seen hunkering down in the shady corners of the city, taking refuge from the heat.

As night fell on July 24, the migrants led by Gómez began to filter out of Tierra Blanca’s dark recesses. By midnight, the group grew to about 20 people taking shelter from the rain and waiting for the northbound train.

Gloria García Zamora, president of the Red Cross Committee in Acayucan, about 187 kilometers from Tierra Blanca, noted that migrants were now “a little fearful” of rejection by the local populace, even though she says that “migrants generally follow the Ministry of Health’s guidelines.” They use masks, wash their hands, and take other precautions.

The two Red Cross volunteers agreed that the migrants were staying a “healthy distance” away from the local Mexicans they encountered along the way. That led them towards train tracks and lonely roads with no people, where they walked as if they had the plague.

Early in the pandemic, there were violent outbursts against migrants in Mexico. On February 27, an angry mob in Oluta threatened to lynch 74 Salvadorans who had been released from the Acayucan immigration office and were staying at the Monseñor Guillermo Ranzahuer migrant shelter. The police were forced to intervene to protect the migrants. On March 3, a mob violently forced a group of migrants out of the Palenque (Chiapas) auditorium where they were sheltering. The migrants survived, but the mob burned all their belongings.

The Monseñor Guillermo Ranzahuer migrant shelter is located in an out-of-the-way place in Ayaucan. Sitting in a small field in front of the shelter, José Luis Reyes Farías, the shelter’s director, told us that fear of the virus, rejection by local residents, and stricter immigration controls have pushed migrants underground, to what he called “dark and lonely roads.”

According to Reyes, the migrants have been forced to board freight trains, walk through jungles and pastures, cross rivers, lakes, and even the sea. They detoured around threatening officials, gave roadblocks wide berth, and avoided the rampant distrust of the villagers they encountered.

Travelling the southern migration route through the state of Oaxaca, we saw blocked streets and shuttered businesses. That only a few, silent people were out and about during a workday was evidence of the serious fear that the virus had permeated the municipalities of Matías Romero, Juchitán, and Ixtepec. The jarring difference from Veracruz with its noisy, bustling businesses was palpable. 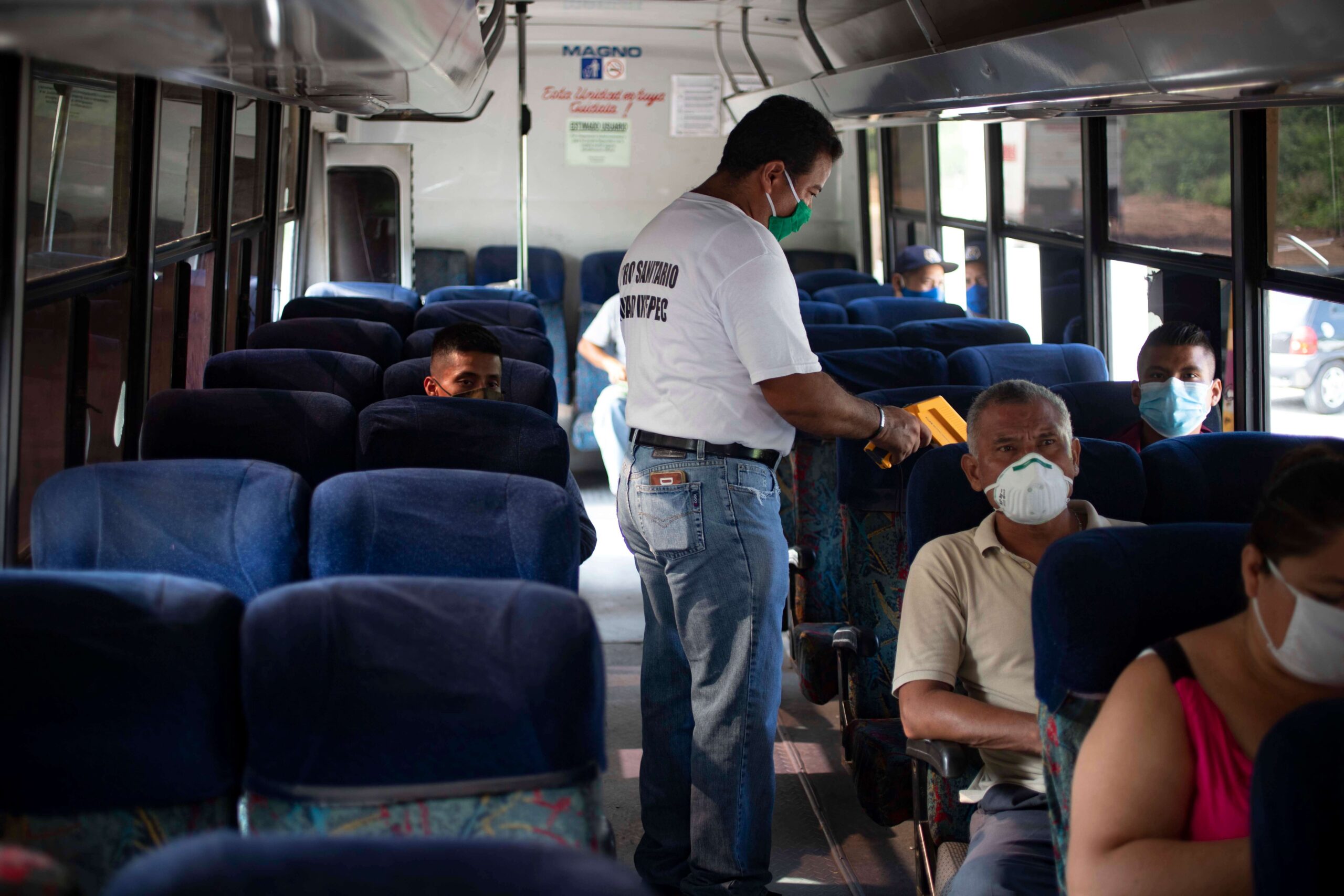 To enter the city of Ixtepec, everyone has to pass through a sanitization station to have their temperatures taken. People coming in vehicles from the Juchitán area must provide good reasons for going to Ixtepec, such as work, visits to the doctor, or other important appointments. Otherwise, police and municipal officials turn them away from the city.

The Hermanos en el Camino shelter in Ixtepec that was founded by the famous priest, Alejandro Solalinde, closed down on April 6 even though none of the residents had tested positive for coronavirus. The handful of migrants at the shelter were allowed to stay after it closed down, but for the next six months the shelter didn’t allow anyone else in and only offered legal advice outside the facilities.

“In March and April there were meetings between the Ixtepec Municipal Committee and shelter staff. The Committee was hearing that people were afraid of the shelter becoming a virus hot zone,” said Diana Mendoza, the shelter’s legal advisor. “The community’s rejection of migrants was intensified by the pandemic. It doesn’t have to be this way. The virus is already here in the municipality — it’s become community spread.” 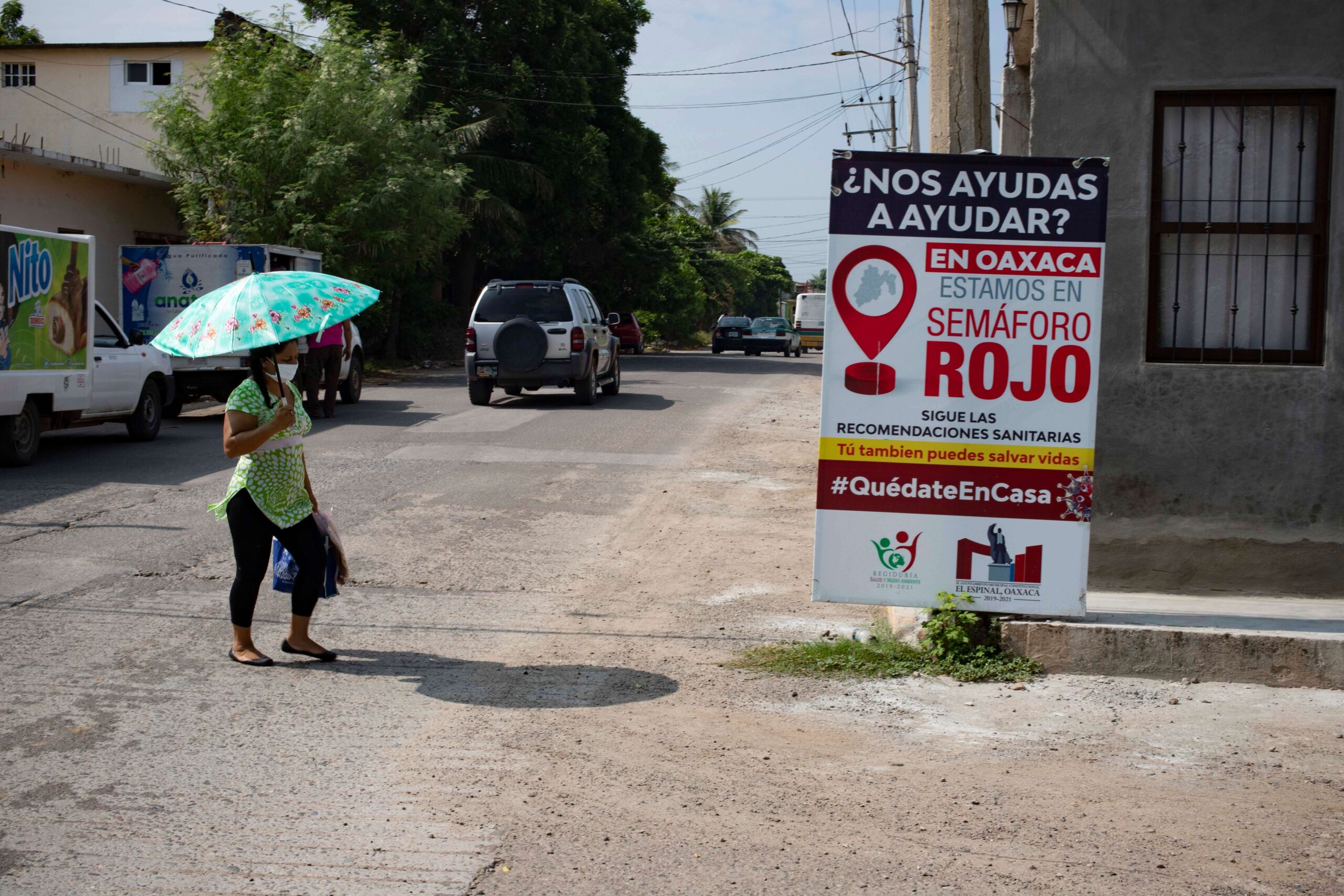 The streets of Ixtepec are plastered with pandemic warning signs posted by city officials.

The Hermanos en el Camino shelter is not the only shelter that has been closed down. Other shelters along the southeastern migrant trail have also been shuttered. In Chiapas, the Belén only accepts 20 people a day and El Buen Pastor (Tapachula) shelters closed their doors, as did the Casa del Migrante Hogar de la Misericordia in Arriaga, and the Albergue Decanal Guadalupano shelter in Tierra Blanca, Veracruz. All of them were seen as oases of safety and rest along the road of forced migration.

For now, the vise grip of xenophobia, coronavirus, and roadblocks has forced migrant groups like the one led by Roberto Gómez underground, pushing them to journey north along dark and dangerous roads.

“We’re sorry that we can’t give them the safe space they need,” said Diana Mendoza in a pained voice.

This is a feeling shared by all the people in this area who have worked for years to make the journeys of people forced out of their countries a little less risky, less tragic, and a little more bearable.

This story is part of a series of articles called “Migrating under Covid-19 rules” you can find them all in Spanish here.